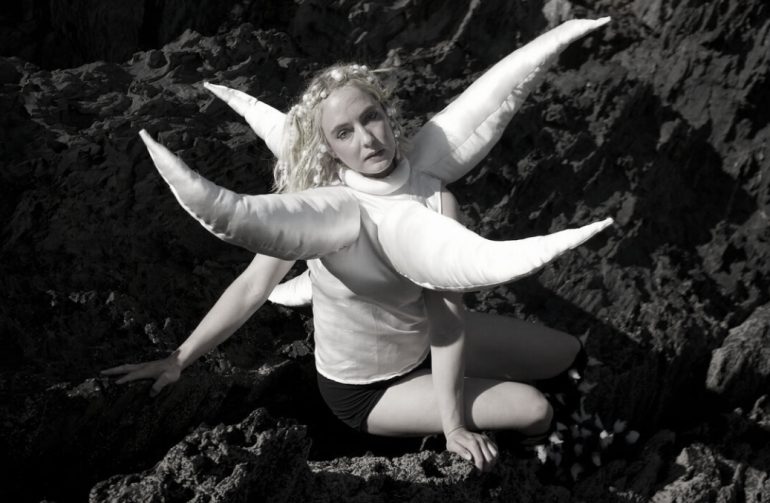 Set to release her album FUGA FUTURA in 2022 via Murmeli Records, singer Livia Rita has shared a new video and single ‘Muscle Of Freedom’. Delightful oddball and bursting with creative fuel, the singer shares a message of human connection and living a sustainable life. A designer, nature activist and art director, the singer invites listeners into her freeing world and headspace one release after the next. Definitely not afraid to stand out, Livia Rita blossoms as an avant pop goddess that is true to her vision and mission.

We chatted further with intriguing creative Livia Rita below.

I would describe my current sound as mystic eco-pop  filled with a combination of electronic and organic sounds… I love merging the hyper-natural, with fantastical, crystalline synthesized elements – shared through my different identities; as a witch, an elf, a siren, or a vampire.

I am a singer, designer, witch and climate activist, who is addicted to the future and the possibility of identities. My upbringing was very rural; in a tiny village in the Alps. There was always a lot of different sounds around, from cowbells to yodelling 🙂 .

Me and my family went to watch a musical once a year in a nearby town, and I remember being in tears watching ‘Les Misérables’. This was the moment I realised that I also wanted to make people feel like this one day. I was so grateful for the tears and emotions the performance gave me. Later, I got my hands on copies of really cheesy dance movies such as Dirty Dancing and Flashdance- these films kind of fuelled my dreams … Outside of this, it was really just the guitar and me. I loved the feeling I got from singing and performing, and the emotions that flowed from it. I felt I had to leave the valley for somewhere bigger to really get started, and so I left for Paris, and then eventually London.

Hmm… during the composing I really focus on the feelings and vision of what I want to express; so it stays intimate, authentic and process focused for a while. The thoughts on how it can reach people and who it should reach is always in the back of my mind. It’s important to me that the music holds as much meaning for other people as it holds for me. I have to trust my instincts, as whatever feels right to me, will also feel right to my audience.

Haha, both! I think the first one feels closer to me. I like to scream out the feelings, react to sadness, allow the rage, and express it through music and dance. The second one I think happens automatically. I am completely fine if it is disturbing for some. There are too many closed minds on this planet.

So far, it’s been pretty consistent. A combination of synthesizers and samples. Every song features an ARP odyssey, Nord Lead and samples from the nature in my home region of Obertoggenburg. When recording outside (with a pretty basic Zoom recorder), each sound is joined by other information in the background, which adds so much life and character. For example a field recording of something percussive will have faint birdsong or cowbells in the distance. The more subliminal, organic elements makes the samples feel alive. I have a musical partner (Toma), who helps bring everything together, which gives me more freedom to work with my voice and body more, which is what excites me the most.

Impossible to say ‘of all time’. But it was easy when I was a teenager.

When I got my first CD, it was Around the World from ATC.

When I bought my first skateboard, it was Complicated from Avril Lavigne.

When I partied for the first time in Berlin, it was Marble House from the Knife.

Now it’s more complicated. So much love for so many songs from different moments in life.

I mean, for me, all art is connected… So definitely all other art forms besides music. Life of course, and my own experience of it. Nature also has a big influence on me and my music. I’m my most creative in nature. It’s where I feel most free. The majority of my melodies and initial musical ideas are born there, so it feels like nature is becoming more and more of a collaborator…

Hmm… A reaction came through via email. I sent the single to some radio stations, describing what the song was, and one answered by saying that they didn’t have anything against “Eco-Mystic Pop”, but they definitely don’t play it. Sometimes (probably for my own wellbeing), I get absorbed in my little bubble and forget that many more mainstream places still aren’t open to something that sounds a bit different, and maybe just stick to the hits? I really wish there was more bravery and fairness in music. Women musicians are still heavily under-represented on stage and on the radio. It’s not good enough. Progress is too slow. There is a long way to go.

The best has been most feedback last year that came over social media (as we were all at home for a lot of it). My heart does huge jumps whenever someone drops a little comment that they added the song to their playlist, that they listen to it up and down. That shows me I can connect to people through my music and that definitely makes the whole journey worth it.

Modern music is certainly more eclectic than ever; the inspiration is taken from absolutely everywhere… and that can really be heard today. I generally like the idea of living in a post-era where I feel like the imitation of the genre is not really obvious anymore… where we are free of genres!

I think the internet and social media are immensely powerful and self-empowering, but also an immensely problematic capitalist system through which we have to fuel ourselves to reach people today. I love it and I hate it. I am definitely hoping for some more ethically responsible platforms to emerge in the future.

But yeah, my love doesn’t go to the platforms themselves, but to the people I can reach through it – I am so grateful for the interactions I receive on them, it means the world to me. Especially during a time where live shows were just not possible. It’s just nice to feel a connection and a growing community of creatures, independent of space. It really has brought everyone closer to the process, and closer to the artists.

OMG, I’m so excited. I love thinking about the future. I have an album called FUGA FUTURA coming for you, complete with ArtFashion wearables and 11 creature game cards, which will hopefully give more insight into the soul of each song. On top of this, I am offering some rituals to perform. I wanted to create a sort of futuristic, eco-mythology around the album, in which we can encompass our future desires but also place our dystopian fears.

I really hope to grow a community and empower each other, to cross-pollinate activist ideas with artistic outputs, to fuel energy within our generation. I am also touring again in 2022 across Europe, hopefully with unique life-changing evenings. And if I manage to get the music heard, who knows. The future is definitely an unashamed projection of my dreams.

‘Muscle of Freedom’ features on the Spotify playlist XPERIMENT_GROUND.fm 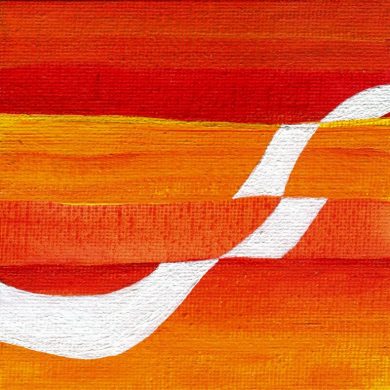