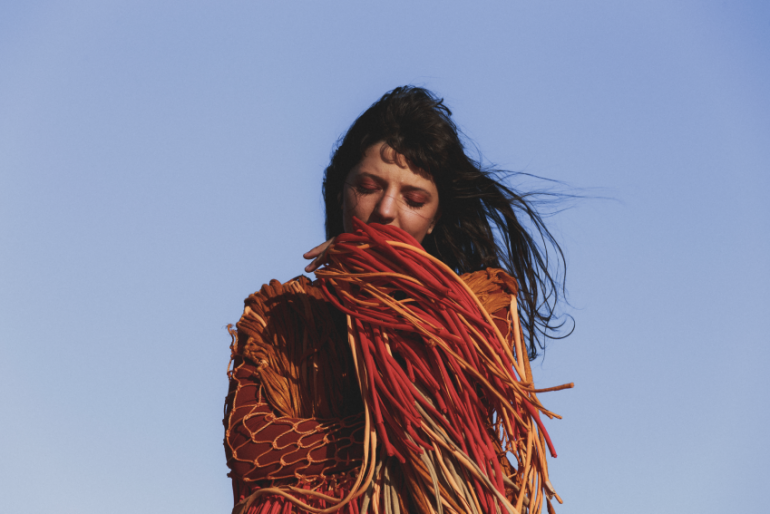 Drum and electronic experimentation project, ÀIYÉ, was developed as a portable solo performance, to fit with the artist’s routine of being on the road. ÀIYÉ’s debut EP “Gratitrevas” (which means “to find gratitude in the darkness”) will be released by Balaclava Records on March 20th.

With a strong interest in innovation, activism and futuristic ancestry, Larissa investigates the universe of rituals and sound performance, combining arts and technology as an instrument of healing and transformation.

Music saved my life when I was a little kid, so I dedicated myself to it, body and soul.

I’m originally an instrumentalist. I spent fifteen years playing drums and percussion with several artists. I also worked as Artistic producer on albums by Gilberto Gil, Chico Buarque, Maria Bethânia, Karol Conká and others, while I was A&R in two different Record Labels.

My last band “Ventre” announced hiatus after performing at the Lollapalooza Brazil, in 2018. After that I started to produce, sing and perform my own songs, and finally moved to Lisbon, Portugal in 2019.

I started composing and singing very recently (only last year), so ÀIYÉ is actually a fresh start for me. Feels frighteningly great.

Both! What made me start composing was the urgency to talk about my feelings and perspectives, of course. But my feelings are absolutely committed to changing the planet, now. Art is a powerful tool and I know it. If I have the chance to talk and there are people listening, that’s enough to be potentially revolutionary. Most of all at this moment, when we have a global crisis directly related to a pandemic and the rise of fascism, I know that my role as Musician is to awaken people, putting them together, giving them hope, love, and perspective. So yes, I’m making music, first of all, for the others and also as a healing process for me too.

I use basically Ableton Live, a multi-effects pedal, a Roland SP-404, and a Roland SPDsx to compose and produce my tracks. I love to explore foley sounds as well as recycling old acoustic recordings in collages. I also make field recordings with my cellphone. I use it to build the beats and the track’s structures.

Not much. In the beginning, it was only Ableton, an interface and the SPDsx as a controller and sampler. Now that I added the SP404 and the pedal, I’m also able to perform without my computer, which I appreciate very much.

When I released the first single “Pulmão” a lot of people asked me “who the hell is this singer?” – I guess nobody expected this kind of music [and voice] coming from me, and I love it!

But I also had some nice reviews of my last performances tho, before the virus and the album came out: Chris Ryan, a UK based drummer and producer I admire very much, said “I loved your show!! So great” on a message. I hope it wasn’t spam, hahaha! There were nice words coming from David Pajo’s and Rylley Walker’s mouths too when we played at the same festival in São Paulo, last year. I hope they were not lying, cause I believed…

Tropical-noise-voodoo-anti-fascist-jazz-lo-fi-trip-hop-against-the-machine <3 sounds like the coolest thing I would ever listen to.

Yes, absolutely. The Internet is revolutionary for musicians, and I hope it always will be. It’s definitely a key for artists to communicate with the audience, and also to be into new stuff like arts and movements.

I think we need it more than ever. Most of all at this moment, when a great part of the world is in quarantine, at home…

But at the same time, I’m afraid it’s gonna be too late when we realize the main free tools and platforms we love are actually controlled by billionaires. They have our data and they use it to make more money by manipulating us. So we need to be careful and clever. We must support the artists, not the platforms.

On the other hand, we are now desperately flooding our feeds with desperate content. I’m afraid it comes to a level that people wouldn’t stand interacting anymore.

Well… anything can happen, and there is a lot of changes coming (for the best, I hope)
By now, feel free to follow me on Instagram: @aiyemusic and share with me your feelings and ideas. I would love to hear from you!

I just released an EP last Friday – March 20th. It’s called “Gratitrevas” which means “To find gratitude within darkness”. It’s about resilience, so I wish it could be helpful and comforting at this crazy moment.

I have more videos to be released soon, and an English version of the Single “Pulmão” (It’s called “Lung”). Before this pandemic, I had four release shows scheduled in Brazil for March, a Japanese tour in April, and I was planning a little tour back in Europe during the summer. Now that everything is cancelled, I’m working on [keep calm and…] new features, and developing new live performances while I’m quarantined at this very gentle friends’ apartment in São Paulo, so far away from home…