Open Unity is the debut EP release on Mesh from Leeds based artist Jinjé which is set to be released June 3rd 2021.

Jinjé, known as Lee Malcolm, heralds from Leeds in Yorkshire. That’s where he spent his formative years helping sculpt the scene as a member of post-rock band turned live techno outfit, Vessels. With over a decade of experience under his belt this new project is a re-envisioned solo endeavour, one that clearly demonstrates a pedigree of experience on the touring circuit as well as love for club anchored experimentation.

The EP features a mixture of vibrant and inviting influences from across his wide musical tastes, it’s Jinjé meets Mesh. This can be heard in the mystic choir like sounding vocal chops and techno stew of “Release in this Instance”, and within the warping electro ballad ‘Cinétique’. The release is further complemented by an energetic left-field pad and percs extravaganza “Too Young For Zorb”. The final track covers ambient grounds with “Drone Alone“. It’s a befitting name which imbues a sense of calm into a transcendent landscape accompanied by faint chirping crickets and soft liturgical vocal chants.

The artwork for the EP has been made by James Lacy (Pointless Illustration James) and features a fitting aesthetic to the inner workings of Jinjés‘ mind. 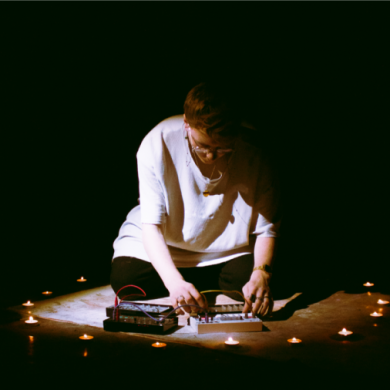